Full Moon Pictures get a bad rap. If you really take a closer look at the films the company have released? Bet you’ll find something you love. Trancers. Witchouse. Crash and Burn. The interesting thing (for me at least) about Full Moon is that not only have they always released some of the weirdest B-Movies but their savvy business knowledge and connection with their fans means that they are normally one of the first to jump on a bandwagon and run away with it. For example, Full Moon were putting out special features and bonus content on their releases when they were still releasing them on LASERDISC. This is leading up to basically me telling you that you should try out Full Moon Streaming, so please bear with me for the next paragraph. I promise I do not hold shares in Full Moon, I just really like what they’re doing.

The beauty of producing and distributing your own films yourself is that you own all the rights. That means if you have a big enough catalogue you could, say, open a streaming website with all your own content, free of region blocks, copyright and all the shit stuff that makes me sad. You don’t have to pay anyone to host your own films, you’re essentially just fucking making money on something you spent money on thirty years ago? That’s exactly what Full Moon did, uploading their entire catalogue to their own site. For £16 every 3 months I can access any Full Moon release at my fingertips, as well as the offshoot companies Moonbeam, Wizard Video, plus a bunch of rare grindhouse stuff like Driller Killer! Not only this, but there’s tons of special features of the films, as well as Elvira intros on most of them. I’M SORRY IT’S JUST AMAZING. I know this sounds like an infomercial but I really don’t think enough people even know they have done this and how GOOD it is. Troma do a similar thing, they upload a lot of their films to their youtube channel, but not everything. 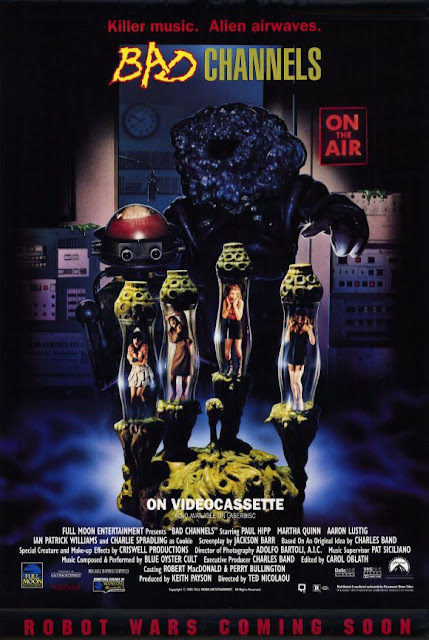 The latter is a hysteria-induced homage to 50s alien invasion movies, with green slime and a cast of B-Movie characters going for it with their lives. It’s punk as fuck. It’s weird and swampy and really dumb. Do you like Terrorvision? Bad Channels is like an unofficial sequel - a new kind of beastie fucking with your obsolete technology. In fact director Ted Nicolaou directed both. They’re both heavy on the pulpy posturing rock of MTV’s hayday, with cheap special effects that gel with the films overall AURAS.

There is no way to talk about Bad Channels without talking about the fact that Blue Oyster Cult wrote the score and performed the majority of the soundtrack. To explain the Bad Things soundtrack would be a hard task. Is it good? No. Is it amazing? Yes. If you’re going to give this a go, I hope you like weird 90s posturing and truly nasty breakdowns. My favourite song used in the film is by a band called, of course, Sykotik Sinfoney, performing I’m So Happy on an operating table.

It’s fair to say that Bad Channels follows a simple formula: aliens hypnotise women into gyrating out their wildest rock n roll fantasies via the radio, at the end of which they will end up in a test tube. This is basically the film. It takes a while to get to this, there’s actually a lot of exposition, including NEWS!!! REPORTS!! Which are one of my favourite things in films (aka Robocop). The film centres around disillusioned DJ Dan O’Dare who is up there with Stretch in Texas Chainsaw Massacre 2 as coolest DJs going. Actually, do you know what this film really reminds me of? The Truman Show. I mean, not plot-wise, that would be ridiculous, but the way the film is set up so you’re watching a host of interesting characters tuning in and listening to these events unfolding. What I am basically saying is Truman Show ripped off Bad Channels, thank you and goodnight. 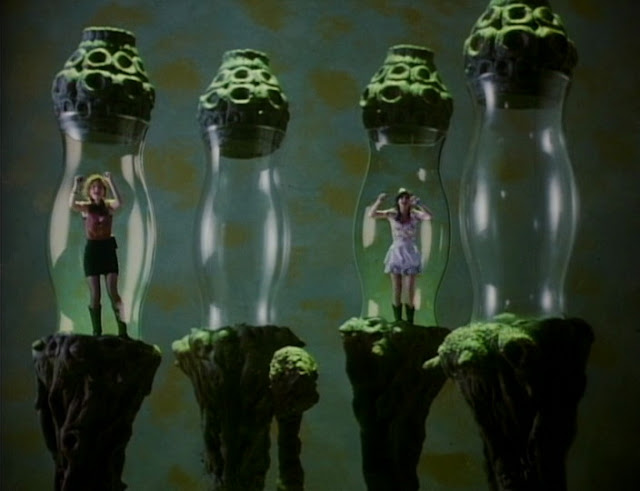 I would definitely recommend Bad Channels if you feel like tuning out of LIFE AND ALL IT’S WORRIES for 90 minutes. The dirty, sleuthy soundtrack is a riot and I guarantee you will get invested in Dan O’Dare the DJ and the perils of hosting a live alien invasion. Plus. PLUS!!! There is a WELL cute, put-upon robot added to the mix, just in case aliens get boring for you.

Final Verdict:
No film with green slime in it is ever bad.