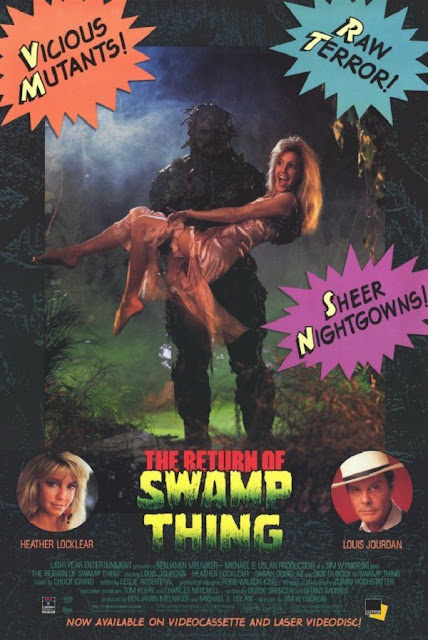 So really, truly if I was going to be say, professional about reviewing my new favourite film The Return of Swamp Thing, it would be prudent to perhaps review Swamp Thing first, right? But here’s the thing… Swamp Thing sucks. I am sorry Wes, I stan for you in so many ways, but Swamp Thing is not one of them. It’s slow, it’s serious and it’s mean. It’s early Wes for sure, but at least Last House on the Left (and the rest) had some sort of shock factor that made them watchable. Swamp Thing is everything I hate about early 80s horror films rolled into one. I dunno, maybe it’s good for you? But I could not in good faith recommend anyone ever watch Swamp Thing, sorry (not sorry).

The thing about being obsessed with sequels is that something you might ordinarily ignore (why the heck would I watch a fucking sequel to Swamp Thing) end up being the biggest surprises. I love finding those little secret films. I love the C.H.U.D II’s and Jason Takes Manhattan’s of the world. I’ve always got time for a horror sequel. There is something soothing about their inner workings, the comfort that you’re going in to it already knowing half the story. When you watch The Fly 2, you know someone’s going to end up turning into a fly. When you watch Amityville Whatever, you know something is going to get possessed by a shitty ghost. Being a sequel obsessive is a bit like diving for pearls (not a euphemism), the thrill when you find actual treasure after wading through utter trash is palpable. Would I like Return of Swamp Thing so much if it wasn’t a sequel? Well, yes because it’s amazing, but you catch my drift.

One of the reasons Return of Swamp Thing has been on my radar is Heather Locklear is in it. A true bastion of 80s American soap operas, I knew that if Heather had enough screentime the whole endeavour would be worth it. The film also stars Sarah Douglas aka Ursa from Superman II. She pops up in the weirdest of places (Solarbabies, The Demolitionist) and is frankly nothing less than an evil DELIGHT every time she is on screen.


Another thing that attracted me to this is that it is rated a 12, a bit of a contrast from Swamp Thing’s 15 classification. You can just tell straight away that a film with a protagonist called Swamp Thing should have always been a 12. It’s crying out for the full antihero-superhero treatment (I’ve never read a Swamp Thing comic but I imagine they are kinda goofy). I can just see a bunch of business men at a desk, surrounded by Toxic Avenger toys saying “hey, you know who are the only people who spend money on Swamp Thing? KIDS!” and thus Return of Swamp Thing was born. The films slightly horror elements really work for it, I’m a huge fan of kiddie horror films, as an aside, the rise of Stranger Things (which is totally for kids fyi) is gonna usher in a new renaissance of kids horror films. YOU HEARD IT HERE FIRST FOLKS. Maybe Return of Swamp Thing will finally get its day in the sun.

Return of Swamp Thing is directed by Jim Wynorski. That is a sentence that may strike fear into your heart, but hear me out. Big Jimmy is actually a great kid’s film director. He’s also great at directing number 2’s (also not a euphemism). A quick scan of Wynorski’s directing credits shows the man has not only worked his magic on Swamp Thing, but also 976 Evil II, Munchies, Sorority House Massacre II, Deathstalker II and Ghoulies IV (not a 2 but you get me). Wynorski GETS the art of a sequel. My name is Robyn and I am a Wynorski apologist. My name is Robyn and I like more films by Jim Wynorski than by Martin Scorcese. 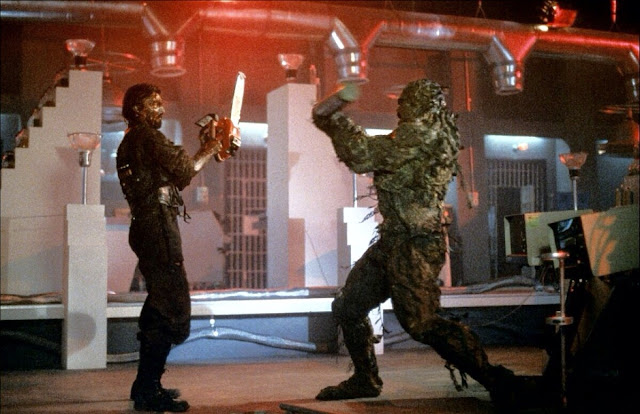 What this film gets right that the original Swamp Thing did not is realising that basically, you have a guy who lives in a swamp and is also made out of swamp, and that with a starting concept that weird you can really only go weirder. Just do whatever you want. Add some adorable money-hunger hillbilly kids? Sure, why not. Make a lady fall in love with a hideous swamp creature because she is a florist with an affinity for plants? BE MY GUEST. This sequel is a rowdy, toxic inspired thrill ride, with snappy comebacks, a plantman that stands for Truth, Justice and the American Way and actually a budget (I mean, for a Wynorski production). There’s explosions, and more explosions, and guns, and hideous mutant swamp experiments and a whole lotta moss. If that’s not enough to convince you to give Return of Swamp Thing a go- what are you even doing here?

Final Thoughts
-Obviously a five star stand up film and it’s currently in Amazon’s two for a tenner deal.
-For further kiddie horror film research our mates at @videonamaste are currently chatting about some of their favourites!