The Other Glass Slipper: A Journey into Disney Direct-to-Video Sequels: Return of Jafar

(Dave Grohl voice) I've got a confession to make. I don't like Aladdin. I know right? Do you want to know the worst bit? It's because of Genie. UH OH. Genie is full of pop culture references that went over my head as a kid and are no longer relevant now I'm an adult living in goddamn 2016. The brawling, screaming commander of the screen takes away from the much more interesting aspects of the film, the two leads, Agrabah itself. Do you know who a much better abrasive sidekick is? It's Mushu in Mulan. Okay, I'm glad we have shared this confession together, now let's move on.

I've also got a much more tepid take here- I don't like Disney direct-to-video sequels. I mean, truly who does?? But you see, sequels are my thing. I've based an entire brand around loving sequels. I should be all over them and yet I dread them. It makes me unhappy that there are Disney films I haven't seen, but what works so well in a live action sequel (a lower budget, the freedom that comes with riding the success of your predecessor) does NOT translate well to animation, especially Disney animation. With Disney, you're used to a certain unbeatable standard. Disney animation is always untouchable, so when you have a sequel that is sub par, lazy even, it's like a slap in the face. I guess it's the blatant cash grab that puts me off the most.

I'm kind of a Disney obsessive (this is an understatement). I pay a tenner a month for Disney Life. Is Disney Life worth a tenner a month? Absolutely not. So why not make it count but watching every Disney sequel uploaded? I mean fair play to them, basically the entire Disney back catalog is at your fingertips here, stuff you never knew even existed. Stuff from your wildest dreams (or nightmares). Also, National Treasure 1 AND 2!! I figured if I immortalised this challenge on the internet I wouldn't be able to back out, even if it kills me, which I'm 70% sure is going to happen, Ringu style, as soon as I reach Hunchback on Notre Dame 2.

I chose Return of Jafar to ease me in, me and Charlotte both agree it's the best Disney DtV we remember from when we were little, and actually it's the very first DtV the company ever released, so it seemed like a fitting place to start. What could go wrong? Well probably a lot. The heavy focus on Iago means more Gilbert Gottfried than you can really tolerate in one sitting, the animation is cheap and Robin Williams vowed never to return after a bust-up with Disney. Return of Jafar was originally meant to be the first pilot episodes of the Aladdin cartoon- and it shows. They didn't bother to mask where they would have placed the advert breaks, preferring to keep that 'everyone stops talking, dramatic music swells and fade to black' aesthetic. This perfectly sums up the ethos of the Disney DtV sequel, save money where ever you can, because kids are going to lap it up either way. That's the magic of being a child really, your completely uncynical view of life means you don't care about changing voice actors, or a downgrade in animation, or a lack of plot, because their favourite characters are back, and your mum's going to welcome it because she's watched Aladdin with you fifteen times in the last month and thank god that fucking song isn't in this one. 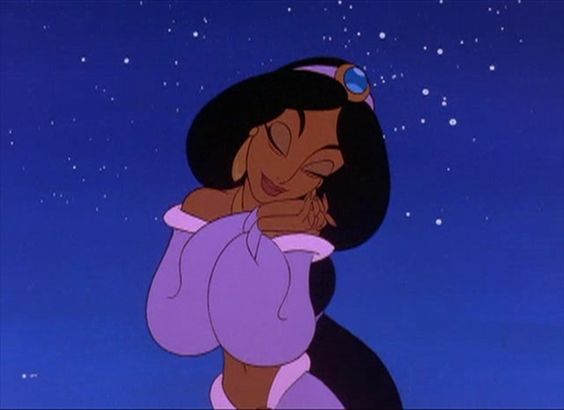 The Return of Jafar focuses on, of all characters, Iago and his redemption. Lord knows why the talking parrot became the lead in the sequel, even The Lion King waited until film three to focus on Timone and Pumbaa. Jasmine is reduced to a nag shrill and Aladdin paints a depressing picture, a man neither belonging in the lavish palace or the outside walls, destined to throw gold coins onto the peasants as he returns to his high walled solace with only a naughty monkey for companionship (what, too deep?). There are musical numbers, and they are pretty awful. Genie as an astoundingly bad-taste song by today's standards. The bonus of this is the film runs at just over an hour, and yet somehow manages to feel like it's dragging, but don't worry because it really is only an hour. Do you know what else was just over an hour? Dumbo. That film shoehorns so much plot it's exhausting, I would say RoJ has maybe 1/4 of a plot to it's name. 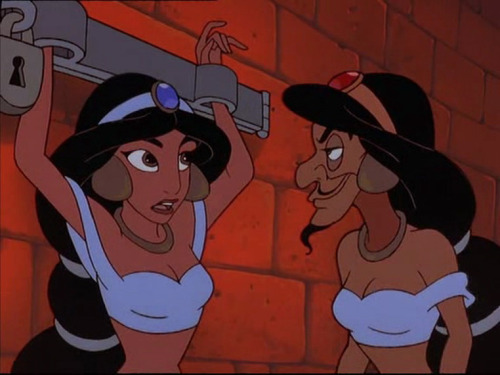 The saving grace is obviously Jafar, and though not terribly frightening anymore he still hams it up and gets to do some real weird shit (there was controversy surrounding the final battle because Jafar's skeleton is on screen for too long). The whole film plays out precisely like a Saturday morning cartoon, complete with sound effects and slapstick that is not really unwelcome. We all remember how much fun the Aladdin TV series was, right? It just feels so hollow, so obvious and cold from Disney, considering how much pride Walt put into all the features he was around to release, it seems completely against the ethos that elevated them to the top of their game. I mean, direct to video sequels are a thing of the past for Disney now, the bigwigs decided they were giving the company a bad rap and they're not wrong. 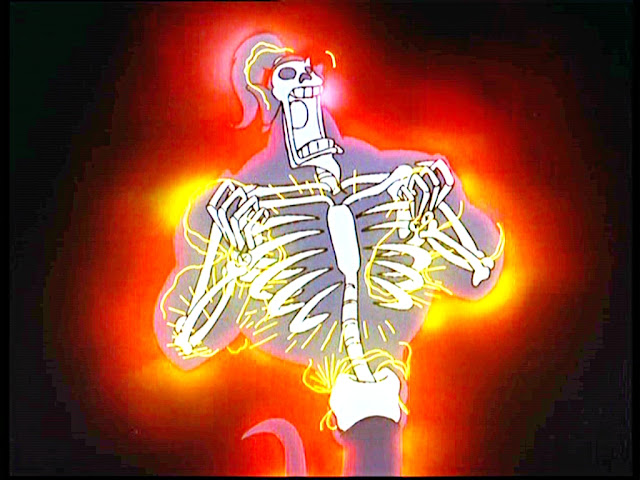 Should you watch Return of Jafar? Probably not. It doesn't add anything new to the Aladdin story, the animation isn't nice to look at, the songs are bad. But it's got that nostalgia kick that makes you feel fuzzy, or watch to maybe wonder how you got sucked into this cheap marketing ploy as a kid.

Final Verdict:
I still cried when I thought Carpet was dead.