A Not So Scary Disney Halloween: The Adventures of Ichabod and Mr Toad

We're back with another road of Disney Halloween Challenge! This time I've watched The Adventures of Ichabod and Mr Toad, a riff on The Legend of Sleepy Hollow and er, The Wind in the Willows. I'M SURE PUTTING THEM TOGETHER MADE SENSE TO SOMEBODY AT THE TIME. Ichabod and Mr Toad is old school Disney, back in the 1940s when they were super into package films (Fun and Fancy Free is a stand out of the era) and drained by World War II, half finished productions were quickly edited together and put out as a double feature as money dwindled.

Not much has survived in the way of a legacy for this feature, the Toad of Toad Hall ride is gone from the parks, but curiously, every Halloween, suddenly it's like Disney remembers The Legend of Sleepy Hollow exists and you can see little nods to it around the park, a long with a heavy feature of The Headless Horseman in the Halloween parade, in pumpkin carvings and the like. 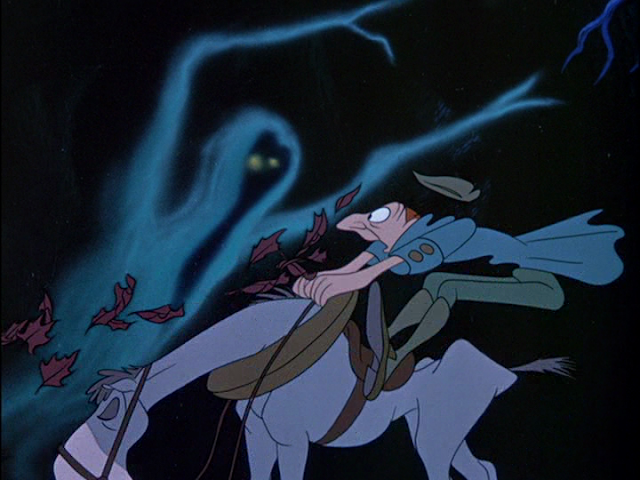 This is not that curious really, because if this double feature has got anything going for it, it's The Headless Horseman. Coming in at a swift 70 minutes, nothing but the last ten are of note, when the Horseman makes his appearance. With a ghostly cackle, swirling wind, inky forest sky and his demonic steed, he certainly leaves an impression on you.

The animation is pretty wild, Disney have always been rather reserved compared to the likes of Tex Avery, but they tried their hand at something a little more loose and silly here, and it definitely grabs your attention in the chase scene at the end. Lanky, angular Ichabod trying to ride to safety is downright funny! 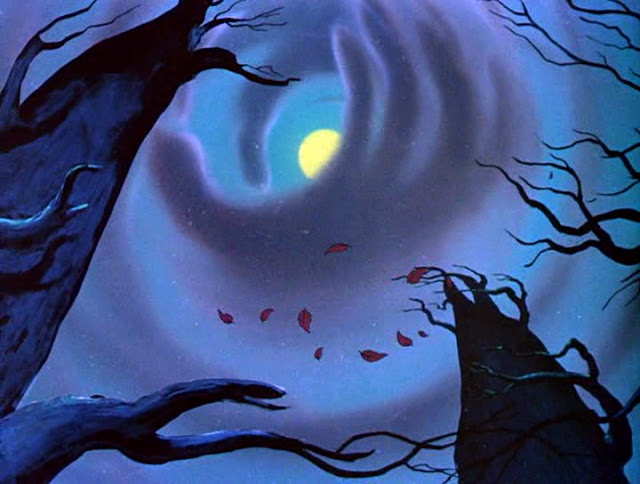 There's not much more to say on The Adventures of Ichabod and Mr Toad. It's so short, and unassuming except for that very last segment. It's ends on a weird spooky note, but even so I wouldn't count this as a Halloween classic, not with Mr Toad tacked on, maybe as a short if you're just watching the Sleepy Hollow bit? I tell you what would be a good idea though, getting all these weird, scary bits of Disney and releasing them together. The Snow White forest scene, Chernabog from Fantasia, the Headless Horseman and this terrifying scene from Mickey and the Beanstalk would be on mine!

Email ThisBlogThis!Share to TwitterShare to FacebookShare to Pinterest
Labels: a not so scary disney halloween, animation, disney, film review, halloween, Reviews, robyn, the adventures of ichabod and mr toad