I couldn't be writing about Halloween films without mentioning the forgotten Monster House, tossed by the way-side in favour of other animation of that year, a perfect Halloween story completely let down by it's terrifyingly soulless animation. I got a love/hate relationship with Monster House, because on one hand the story is so rich and well paced but on the other is this total sense of uncanny valley as you stare into the unblinking eyes of the early roto-experiments that brought us other terrifying (in the wrong way) children's classics like Polar Express, Beowulf and Christmas Carol.

If Paranorman perfected the art of the kid's horror film, Monster House was definitely laying the groundwork. Focused around a neighbour's house with a scary secret, murder, intrigue and a weekend with your parent's away, it's the perfect set up for a gloriously creepy caper.

Monster House came out in an animation drought. I'm trying to not be dramatic, but it shares release periods with Hoodwinked, Flushed Away, Cars and Over the Hedge. Really Monster House should have had an advantage to be the stand out, because it's the only one worth how much it cost to make. But mysteriously we collectively wiped it from our minds when we wiped 2005/6 off the face of the Earth (I believe WALL-E actually broke this average animation curse in 2009). 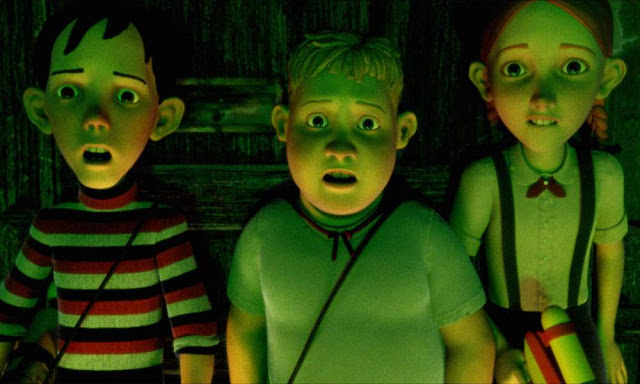 Monster House kind of makes my heart ache, because even if the animation style had been perfected, it still would like rubbery and eerie like Polar Express, we would never have received a good-looking Monster House movie. Luckily for me (and most people), I can still get something out of a film that isn't fantastically made, but that's the pill to swallow with this film, because it is a labor of love and it IS well directed, the action sequences, the voice acting, the way the kids move is all on point, but then they got these ghostly Victorian child ghost eyes which you end up staring into and finding deep dark secrets about yourself that have laid dormant for years. Or something.

I'd much rather focus on the positives of this sweet little film, the tender life lesson, the truly massive action sequences, the Home-Alone style plots and kiddie-inventions, the way it's not afraid to be cruel to it's children. Monster House is truly set up like a any adult horror film, and I respect that a lot.

Maybe revist Monster House tonight, during the Witching Hour, and add it to your Halloween traditions. Because it deserves it, even if it is a little rough around the edges.