Netflix is a treasure trove of of these, my favourites play out like Lifetime movies and they are always paint by numbers predictable, which is why they are so fun, they're literally a form of cinema you can watch and switch off to at the same time. Here's a selection I have watched and enjoyed on Netflix.


No list would ever be complete the camp cult classic in the making Obsessed. Starring Beyonce and Idris Elba as the world's most attractive couple who's blissful marriage is interrupted by certified bananas blonde Ali Larter, who throws herself at Idris and TOUCHES BEYONCE'S BABY. There is a fight scene in this that lasts literally fifteen minutes and involves using household items like lamps, banisters and chandeliers as weapons.

Obsessed would have just fallen into TV Movie obscurity obviously if it hadn't starred Beyonce spouting such iconic lines as quoted straight from imdb here:

Beyonce: Well, first, I suggest you pack your toothbrush. And then I want you to get your shaving kit, your underwear, your prophylactics if you think you need them and get your ass out!
Idris: And go where, Sharon?
Beyonce: To hell! But, until then, I suggest maybe the four seasons.

RIGHT?! Cinema literally get's no better than that. Beyonce has played Etta James and Diana Ross (basically) but Sharon in Obsessed is what I will always remember her most for.

Plus the film is absolutely a trove of amazing gifs, which is all we really need in the internet age.

I honestly cannot recommend watching this film, it's on Netflix so there isn't really an excuse. If you're still undecided you can watch the fight scene here in shitty quality.

Okay so Stalked By My Doctor is an actual Lifetime movie. My biggest regret in life is not being born in America so I can't use the Lifetime streaming service. I love Lifetime movies because they are always 70% beige, they are good no frills film making. There is no dutch angels or creativity in a Lifetime movie, it's the meat and potato of cinema and I respect them so much for that. They are films made on a shoestring that keep churning out a profit because Lifetime hold all the rights.

Famous for biopics on dead celebrities, one of my favourite movies EVER if a lifetime movie (Death of a Cheerleader starring Tori Spelling), they also deal in missing kids, teen murder and SO MUCH MORE. Watching a Lifetime movie is like watching the cinematic equivalent of reading Take a Break magazine.

Stalked By My Doctor stars Eric Roberts as the titular doctor bringing his best unhinged performance to the weirdest premise ever. Dr Albert Beck is a skeevy doctor who's been struck of the register for well, being a skeevy pervert mainly. His penchant for college aged girls and manipulating them into thinking they need him in their lives is enough, but it's when it finally dawns on him EVERY TIME that they don't actually fancy him or want a relationship is when he gets a bit murderous, with electrifying results.

SBMD stands out for me because it puts Eric Roberts in the role that is normally saved for a women only. Dr Beck is the needy one, Dr Beck is the bunny boiler. Eric Roberts clearly relishes this role, giving Nicholas Cage a run for his money in some of his more questionable acting. He enjoyed the role so much that he reprised it in Stalked By My Doctor: The Revenge which is EVEN MORE unhinged than the original. It really has to be seen to be believed. He also makes the world's worst pancakes in it. 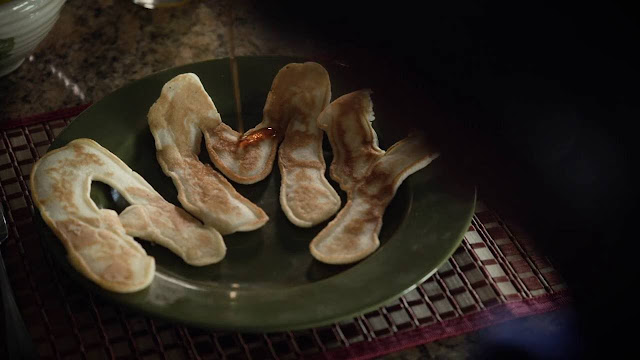 Stalked By My Doctor is The Stepfather remake we deserved and never got. Unwholesome, schlocky horror that's safe for work enough to be on the telly at 3PM on Channel 5. YOU KNOW WHAT KIND OF FILM I'M DESCRIBING HERE. Chances are if you're reading this far you're a fan of these kind of films and I urge you to seek both these out on Netflix and watch them IMMEDIATELY.

What better way to spend your time than with early 2000s box office flop SWIMFAN? This film not only stars middling actors of yesteryear, it also actually looks really nice. You can almost smell the chlorine from all those pool shots and everything is neon blue or dark, husky pink.

Swimfan tells the story of a totally devoted high school sweethearts who are cruelly torn apart by the boyfriend being led astray and fucking in a swimming pool which of course, we all know is physically impossible. How are the men never at fault here, it's quite simple, don't fuck anyone. That's all you gotta do guys! How I would love to see the girlfriend and the mistress team up to punish the boyfriend in just one of these movies.

The Temp is worth watching not only for the plot but also the absolutely disgustingly fabulous outfits, that half 80s mixed in with the first signs of 90s fashion. The suits are particularly ugly, but Lara wears an absolute array of earrings that I would kill for.

The Temp has a great showdown and to be honest it kept me guessing right until the end, there's so many twists and turns that you'll second guess yourself. If you feel like the thriller connoisseur this one will throw you down a well of uncertainty.

If you're anything like me you will watch any film that has the slightest hint of queerness promised and Breaking The Girls is both heavy on lesbian obsession but also reminded me so much of Cruel Intentions in the iPhone age.

BTG stars Madeline Zima who I am still waiting for to have her big break, it can't be far off now?

These kind of thrillers do not even have to be about amorous love. We have all experienced that right, where you make friends with someone and you feel like they're slowly morphing in to you and taking your entire identity? The Roommate explores this with post-Gossip Girl Leighton Meester in an actual baddie role. Leighton admires her college dorm mate so much that she wants to be her, and not just in a like hey isn't this weird we've turned up at the same party in the same outfit? kind of way, but in a hey I am going to Thanksgiving round your house because you don't exist anymore kind of way.

Dark Intentions aka Don't Wake Mommy is another Lifetime movie that actually has something to say, and then takes it totally into the absurd so that it's original message is left in the dust. Dealing with post-partum depression the main character is gaslighted to fuck and no one believes her that her new best mate is actually trying to steal her baby.

OF COURSE SHE'S TRYING TO STEAL THE BABY, DO YOU GUYS NOT KNOW YOU'RE IN A LIFETIME MOVIE? The baddie in this goes even further than just TOUCHING THE BABY like in Obsession and the showdown at the end is actually fucking creepy and involves a lot of weird shit. I don't want to spoil it but it is worth a watch, especially as other films where women are made to think they are descending into madness (hello Rosemary's Baby and mother! out this year) are lauded, where as a Lifetime movie is just laughable apparently? JUST GIVE IT A CHANCE.

WTBB lets you sympathise with its villain for a little while before she is irredeemable which I like.

Why not try and couple of Netflix? I assure you these are not the only ones. There's The Boy Next Door starring Jennifer Lopez which is worth your time if you love Jennifer Lopez (I do) and a whole host of implausible scenarios to suck you in.