A Not So Scary Disney Halloween: Don't Look Under the Bed

The 90s were a golden time for Disney horror experiments, I guess that all ended with The Haunted Mansion because it was terrible, but we will always have time to revist the Disney horror classics every Halloween. Hocus Pocus is the one that will spring to mind, but Disney actually brought out quite a variety of weird scary films to tie in with Halloween vibes. One such one was Don't Look Under the Bed, released in 1999 and definitely a big hit in America. Here? Not so much. 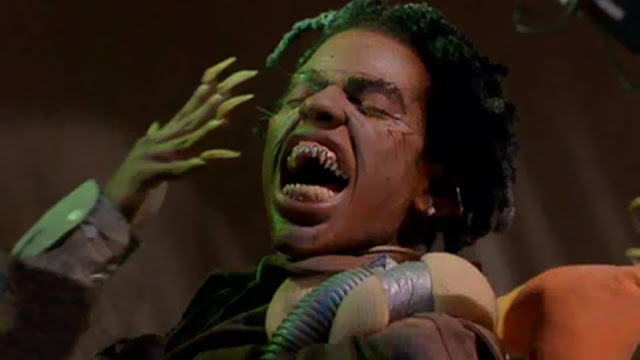 In fact I had all but forgotten this film until I saw it on Disney Life. I remembered bits and pieces, I remember the under-the-bed realm being really cool and being too old to find it properly scary, but nevertheless I'm sure it was on frequent rotation on either Channel 5 or the Disney Channel for the early 00s.

The film on the surface sounds pretty childish, a girl is blamed for the Halloween pranks around town that she couldn't conceivably do (putting all the neighbourhood dogs on their owner's roofs!?) but it is in fact the work of a BOOGEYMAN, and it's up to Francis and Larry (an imaginary friend) to stop the monster stealing away her kid brother.

That's just on the surface. As you watch more and more the real plot of the kid brother having leukaemia becomes more and more important. The film deals with illness in the family, fears about sickness and the tragedy of having to grow up too early. Yeah what I'm saying is, this film about the boogeyman is actually very deep. 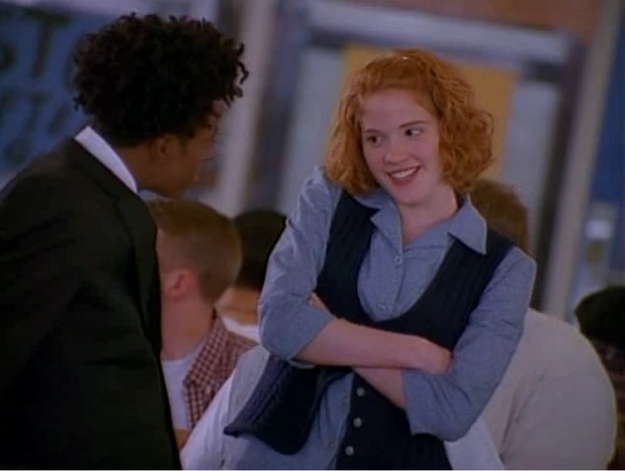 Let's talk about this girl first. This is our main protagonist. This is Francis. Francis Bacon McCausland. For some reason, like literally no possible reason I can think of the main character was named Francis Bacon. Right let's stop there for a second. No children know who figurative painter Francis Bacon, dead as of 28th April 1992, is. Why was this included, I NEED to know the backstory behind this decision. Mind you, her little brother is called DARWIN. I think it's meant to show us that there a really smart family (Francis joined high school a year early), that is the noly suggestion I can think of that makes any sort of sense. Still, I can't believe I watched a Disney film where the girl in it is called Francis Bacon (Bacon as in her middle name is Bacon) MacCausland.

Right so, I have that out of my system now, so let's get back to the film. Is it scary? Um, YES. It has it's moments of light relief but Darwin's illness storyline along with incidents like the doll above make it pretty creepy, there are jump scares and great make up effects, if I was 8 I would be absolutely sickened. It's definitely not Billy-Butcherson-in-Hocus-Pocus levels of scary but the back of the DVD would definitely say MILD PERIL.

The whole film has that very orangey, Halloween vibe that we crave this time of year. As an aside, isn't this bit of year just the best for watching films? You can go from mainlining horror in October right through to the Christmas telly. Before you know it you're watching Muppets Christmas Carol for the sixth time and it's not even New Years Day yet. It's January onwards, that's the official start of winter for me because there's nothing left to look forward to.

There was quite a bit of DLUTB that reminded me of Drop Dead Fred, I guess when you're dealing in imaginary friends there's always going to be some crossover, but Larry's chaos and delight in getting Francis into trouble reminded me more than a bit of the Rik Mayall classic. There's even a weird kiss at the end where you think when you're 11 "I wish I was kissing Larry!" and when you'e 29 you think "wait Larry is like 1000 years old!".

The film is full of small-town suburban Halloween vibes, those sparkling kitchens where you might find treats and the tree-lined streets that will soon lose their leaves. You can practically smell the bonfires coming out of the screen.

Don't Look Under the Bed is highly recommended to watch with some kids, with a 1:20 running time it's that sweet spot where they will shut up the whole way through without getting bored.

Email ThisBlogThis!Share to TwitterShare to FacebookShare to Pinterest
Labels: a not so scary disney halloween, disney, don't look under the bed, halloween, Reviews, robyn