Have You Seen The Meg Yet 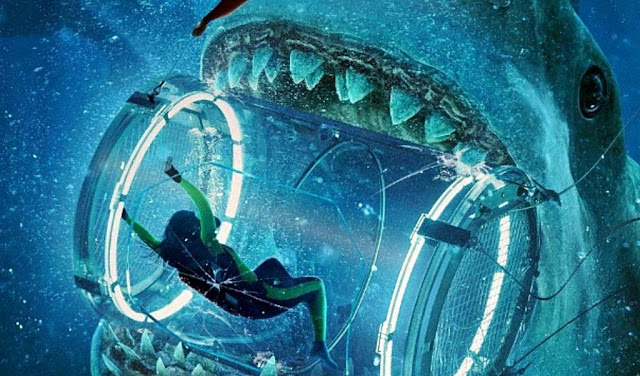 When I ask this of friends, colleagues, family, the response is usually “is it a good film, or is it a bad film you say is good?” The people who know me are attuned to my sense of hyperbole, they have been burned before by my adulation of Jim Wynorski, I will readily admit my taste in films is askew to the general populace, but I can say hand-on-heart that yes, The Meg really is a good film.
The journey of sharks in films that has led us up to this point has been a rocky one. The Seventies gave us Jaws, but it spawned mediocre copycats (Tentacles, Barracuda, Up From The Depths) that dined out on Jaws’ success well into the Eighties. Sharks were back on form for the Nineties with the delightfully nutso Deep Blue Sea, a film that could only have been made from the dark depths of a cocaine blow-out, such is it’s weirdness and ballsiness.
But then Asylum came along, and played cruel trick after cruel trick on us, tempting us into their money-making scheme with titles such as Mega Shark vs Giant Octopus, which was little more than people discussing monsters on a boat and nary a glimpse of some action. A con. A waste of your hard-earned money that happened over and over again. Asylum’s gruesomeness is so sparse, they are so safe, that they are often shown middle of the day on television.
Things picked up with the Sharknado series, which started out cheap but cheerful and have descended into absolute, glorious chaos, where you can see Jedward and Tara Reid within mere frames of each other. This is all well and good, but can this be called cinematic evolution? If you look back to Jaws, was it not an entirely serious affair? I want to see the Prime Minister’s leg chomped off by a shark more than anyone, but I’m craving some semblance of normalcy, I am not yet ready for (my guess) Sharks in Space (though I would watch the sequel dir. by Wynorski).
My own interest was once again piqued with The Shallows, the rave reviews sucked me in, I was ready to see Blake Lively go toe-to-toe with a shark, and her own demons. I was led to believe the shark was even bigger than the shark in Jaws! Watching Jaws as a child, the Great White seemed impossibly huge, my brain could not fathom its sheer size, so perhaps it is my own middle-aged, jaded brain that stopped me from seeing all the fuss for The Shallows. This was too serious, and it wasn’t even a big shark! Could the equilibrium of Jaws ever be reached again?
Enter The Meg
The main hook for The Meg, is that the meg is an extremely big shark. People love to look down into the terrifying depths of a shark’s gullet and think they could be swallowed whole. Turteltaub never shied away from showing his monster, even within 30 seconds of the trailer. This was the real thing, this was not a con, it was as if they knew we were tired of the bad CGI and lackluster action of the mid-naughties creature feature. I was instantly smitten, I even watched every promo that popped up between Instagram Stories, just to feel that flicker of excitement in my belly.
The second hook is that Jason Statham throughout the promos uttered the wonderful line “my God… it’s a Megalodon!” in every single one, without a knowing wink to the camera. This is a film that was played straight, just a bunch of every day marine scientists and deep sea divers caught up in a ferocious prehistoric attack. It’s a nice contrast to Sharknado or even Lake Placid, it feels brave to not embrace the schlock which would afford the easy ‘you’re not cool enough to get the joke’ get-out clause if the film tanked.
It would be easy to become complacent when you have a draw as big as a megalodon guaranteed to put bums on seats, but The Meg surpasses all expectations with lovingly thought out set pieces, giant future-tech underwater laboratories and, in the most memorable scene, vibrant blue sea peppered with pastel-clad beach goers.

Criticisms of The Meg lament the time spent building up character backstory, but are we that far gone as a species that we cannot sit through some family drama to make us actually care what happens once someone inevitably gets thrown into the sea with an apex predator? The surprisingly diverse cast have their own hopes and aspirations, differences of opinion that need to be pushed aside to face the embodiment of destruction, a true Man vs Beast story.


The Meg left me feeling so satisfied, that I could easily live out the rest of my life without ever watching another new shark movie ever again.

Email ThisBlogThis!Share to TwitterShare to FacebookShare to Pinterest
Labels: 2018, Reviews, the meg